Well, on this post I want to share a part of my life that changed the life I once ever dreamed of, a story I promised you on my first post. Read it here, if you haven’t read it yet, that post will help you understand what my life was back then.

Here’s the story when it all began. I was a competitive swimmer and through swimming I got so many achievements. I am so thankful that I got an achievement by Invitasi Renang Ganesha – ITB as The Best Indonesian Female in 2005 for my age category. I felt like my life was so perfect and on track just as my big dream to be a part of National Team to compete in International level. Everyday, from Monday to Saturday, I had morning and evening swim practices, lots of weekend swim meets, got many medals, got scholarships, I exactly lived a life how I wanted to picture my life.

That was until my life took a detour. 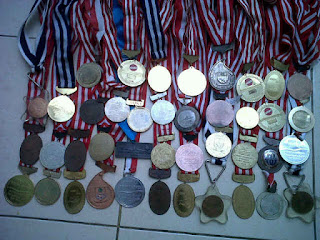 Some of my medals 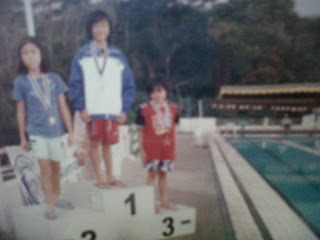 That’s me in the middle. This was taken in 2005. Sorry for the bad resolution 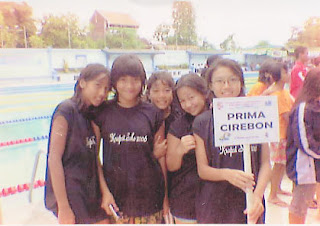 My last national competition in 2006

In the mid of 2007, at the age of 12, on Saturday, right after I had my evening swim practice, I was having a family time at a mall in my hometown. I was walking in front of my grandma and suddenly she called me and said that my shoulder was uneven. I thought it was caused by my sling bag, so, I shifted my sling bag on the other side of my shoulder. However, it remained the same as how my grandma saw. So, we went to a fitting room immediately to check it out and the odd was true, my shoulder was indeed imbalance. Then, the next Monday, my mom and I went to the doctor to check it further by taking a x-ray of my spine and the doctor diagnosed me with scoliosis. Since, there wasn’t proper x-ray device in my city, the doctor recommended me to a Professor (Alm. Prof. Subroto Sapardan, SpOT) in Jakarta (He was one of the 7 best orthopaedic doctors in the world).

Then, finally the result came, I had double major curve, the curvatures were 45 degrees for the right thoracic curve on top and 53 degrees for the left lumbar curve on bottom. It was severe scoliosis. What made it more severe and dangerous were I was just 12 yo, not done growing, and it still took a long time to stop growing. Pity on me. 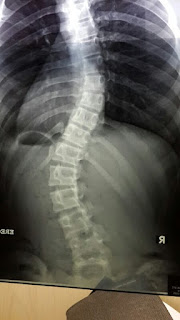 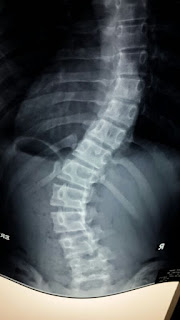 At that time, the doctor suggested me to undergo spine surgery but if I did that, I should 100% leave my swimming career. He also said that I had growth defect. That scoliosis did disturb me and I had to stop running, playing basketball and softball at school (I was so active in sport), and playing drum. Yet, I was still allowed to swim because it is a therapy for my spine.

Living with fear of not being able to do what I loved to do, I decided to wear brace, a device designed in accordance with my body shape to hold the curve to keep it from happening. 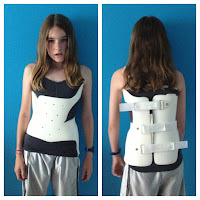 google.com
The brace in the picture above is similar with mine

It was not only hurt and uncomfortable but also I felt ashamed of wearing it wherever I went. I got bullied and everyone kept asking me, “what are you wearing?”, “why you wearing it?”, “you sick?”, “you look like a robot” those kind of questions were the most painful ones for me inside. I could hardly bear the constant pain, the emotional & the psychological stress.

“I was broken inside.“

Not a coincidence at that time I joined a class at church called Dasar Kekristenan (The Foundation of Christianity), through that class I was strengthened by both every lesson and every person in my group. Frankly speaking, due to this condition I started to look for God wholeheartedly and surrender all to Him. Despite how broken I was, my family in Christ and my family never ceased supporting and praying for me.

Those days are the darkest days in my life. Day by day, I tried to look happy in front of my family and everyone I met. Every time I was having swim practices, I was constantly worrying that I would never swim like this anymore, my swimming career would be over soon, and I had growth defect. Well, my life is over. 3 months passed, my spine didn’t get well, it got worse instead, the curvatures became 47 degrees & 56 degrees, it was a rapid growth. My professor did suggest me to undergo the surgery as soon as possible because if it kept happening this way, “it would hard to breathe”, “more pinched nerves”, worse body structure, and so on. Then, the following week was the the most miserable time because I finally decided to undergo the surgery. It was surely a complex decision and I just ended up crying out since so many things I loved had to be left behind. It’s not about the physical condition, it’s more than that. Some times, the desire to not undergo the surgery came into my mind but I thought that if I didn’t take that decision, it would harm me more in the future and some times, I thought what if the surgery failed? I wouldn’t be able to walk again, I would be totally paralysed for the rest of my life. Yet, in the end, every time I prayed, I was sure with my decision.

Before the surgery, I had a plan to cry right after I entered the operation room (OR) because I simply didn’t want to cry in front of my family. However, something strange happened. The moment I entered the OR, I felt peace overflowing in my heart, my fears were drowned in indescribable peace. After that, while I was still waiting for the surgery, I prayed to God and surrendered all my life to Him. I trusted that He would take a good care of everything.

The surgery went for around 5 hours and at 7/8 pm I started to get conscious. When I opened my eyes, I firstly saw my father and he said “Miracle”. The next week, the Professor said that there was not bleeding at all, the result was beyond doctors’ expectations and estimations, and it was the very first time he did a surgery with the best result ever.

You can watch the video below to help you visualise the spinal curvature surgery process.

Several days later, I started to learn to sit and walk again, it wasn’t easy at all and was even hard to sit only for 5 minutes! What a struggle! Yet, I am thankful that it only took me a week to be able to sit and walk well again (even though I looked like a robot. Haha).

I was beyond grateful for His favor and mercy at that time, He not only worked during the surgery, but also intervened my recovery process. He never leaves me.

“Now faith is the assurance (title deed, confirmation) of things hoped for (divinely guaranteed), and the evidence of things not seen [the conviction of their reality—faith comprehends as fact what cannot be experienced by the physical senses]. – Hebrews 11:1 AMP“

This was my very first time I experienced His presence & miracle and I’ll never forget that for the rest of my life!

I will share much more about how my life was after the surgery on the next post, but for now, let’s just say EVERYTHING HAPPENS FOR A REASON. 🙂

2 responses to “A Life Interrupted: Living with Scoliosis // Part. 1”

Thank you for visiting my blog. I'm Ivana, I was born and raised in a small city in West Java, Indonesia, called Cirebon. The one thing that I had loved the most since I was 7 years old was swimming which became the reason why I pursued my career in sport. Then, in 2007, something I had never imagined came my way.

No images found!
Try some other hashtag or username